Note: Rad: Before the Adventure (Rad Capstone) is the non-canonical prequel to Rad. Only select story elements and characters have been carried over to the full game, Rad.

Rad is a fast-paced, 3D Platformer Collect-a-thon inspired by platformers of the late 90’s and early 2000’s, such as Jak & Daxter and Sonic Adventure. The game follows Rad, a rebellious teenager with no recollection of his origin. His chance to find out comes when a mysterious, cloaked figure visits town…

Development on Rad began in 2015. Inspired by the resurgence of 3D Platformers appearing on crowdfunding sites, a small team of college students began working on their image of a next-gen 3D Platformer. Spearheaded by Character Artist, Brandt Howard, Rad was created. Rad has gone through multiple prototypes before landing on a final design. During the Fall and Spring semesters of the 2017-18 school year, the team began work on Rad: Capstone (later renamed Rad: Before the Adventure) for their college capstone project, which later became a finalist in the 2018 E3 College Game Competition. In the Spring of 2019, Knick-Knack Games was officially formed, and true production on Rad began. 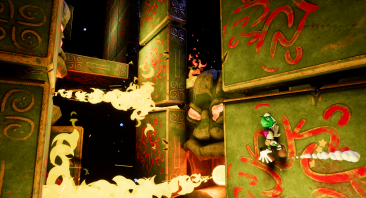 Knick-Knack Games LLC is an independent game studio working out of Grand Rapids, Michigan with it’s first project being Rad: Before the Adventure, and moving forward with a full version of Rad.